ODK-X Survey is an Android application for performing data collection in the ODK-X framework. It operates similarly to ODK Collect, but is based on HTML, CSS, and Javascript rather than native Android, and is more flexible in its presentation and execution.

ODK-X Survey only works on Android 5.0 and newer devices.

ODK-X Survey cannot read or display the forms created for ODK Collect (that is, those created via ODK Build, XLSForm, or other form design tools). ODK-X Survey operates with ODK-X Data Management Applications*.

If you have not installed Survey already, follow our guide for Installing ODK-X Basic Tools

We have included a sample application built on top of Survey along with a handful of forms that showcase some of its features in Trying Out ODK-X Survey.

Survey forms are defined in HTML, CSS, and JavaScript that can be edited by your organization. If the interfaces displayed in this guide do not match the form you have on your device, contact an administrator in your organization for further guidance.

The home screen of Survey displays a list of all the forms available on the device. 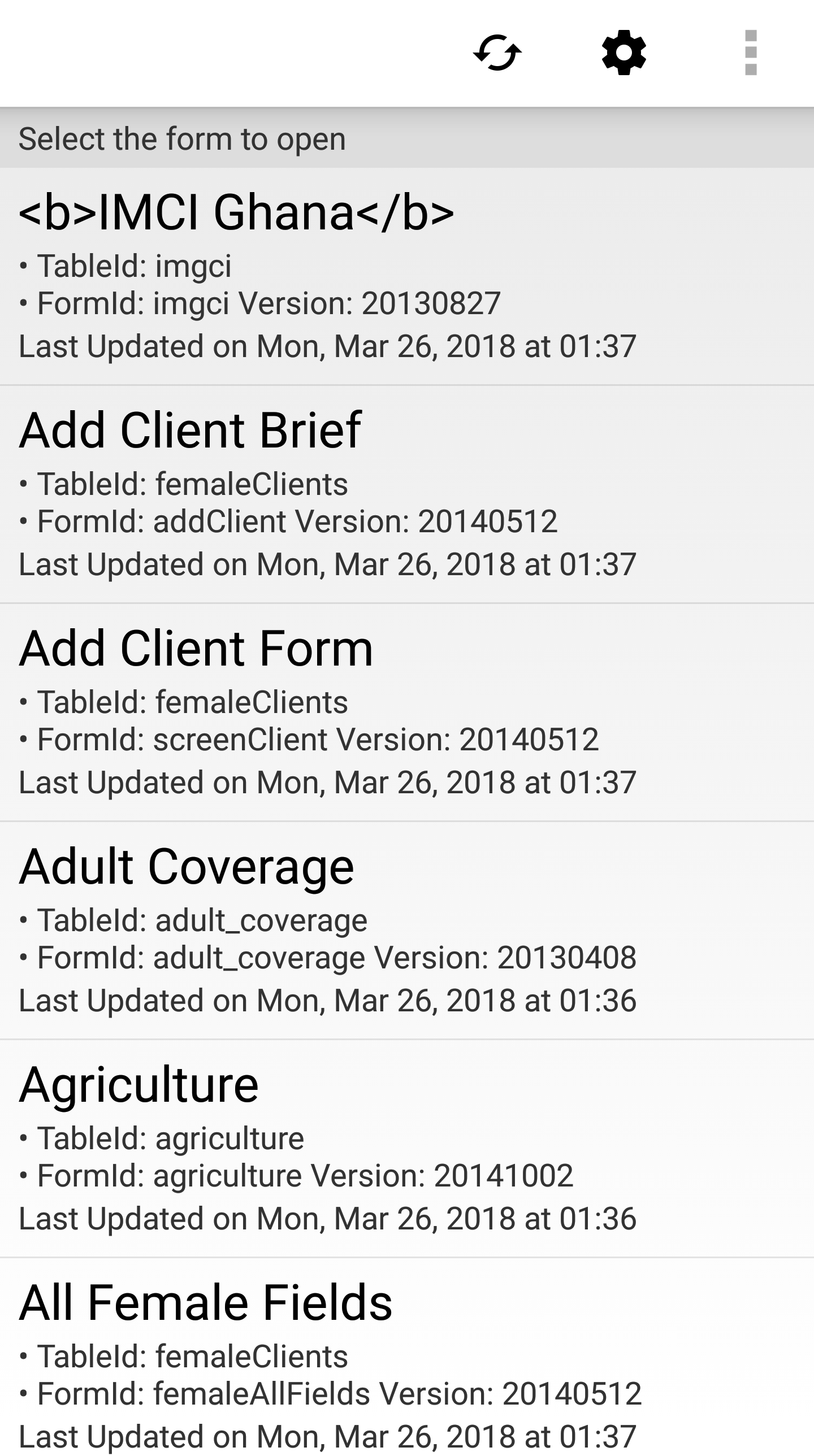 To open a form tap its name on the list. This will launch the home screen of that particular form. Below we have opened the Example Form. 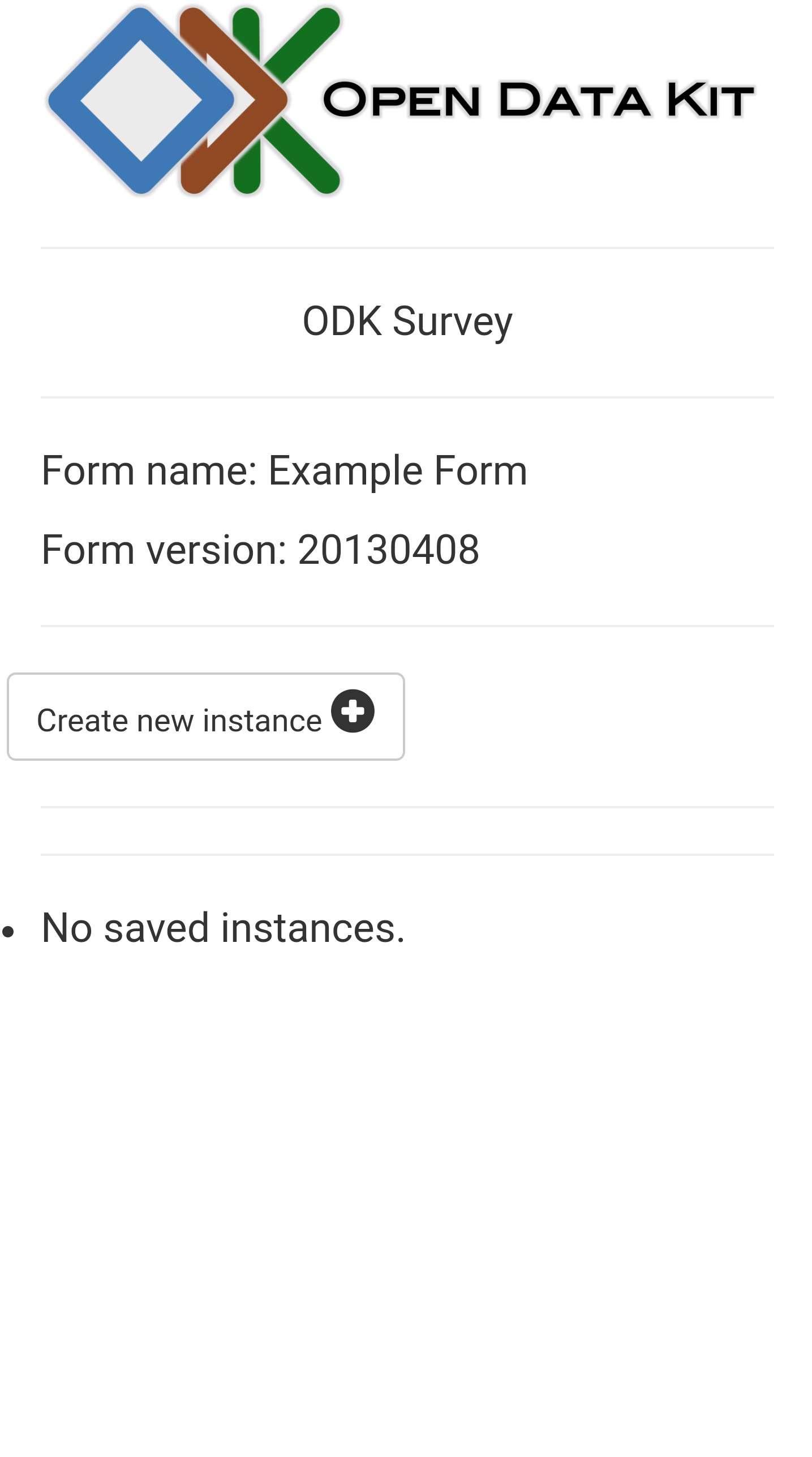 This screen shows the form name and version. It also shows a full list of saved instances of the form. For more information on viewing and editing these form instances see the section on Viewing Saved Form Instances. 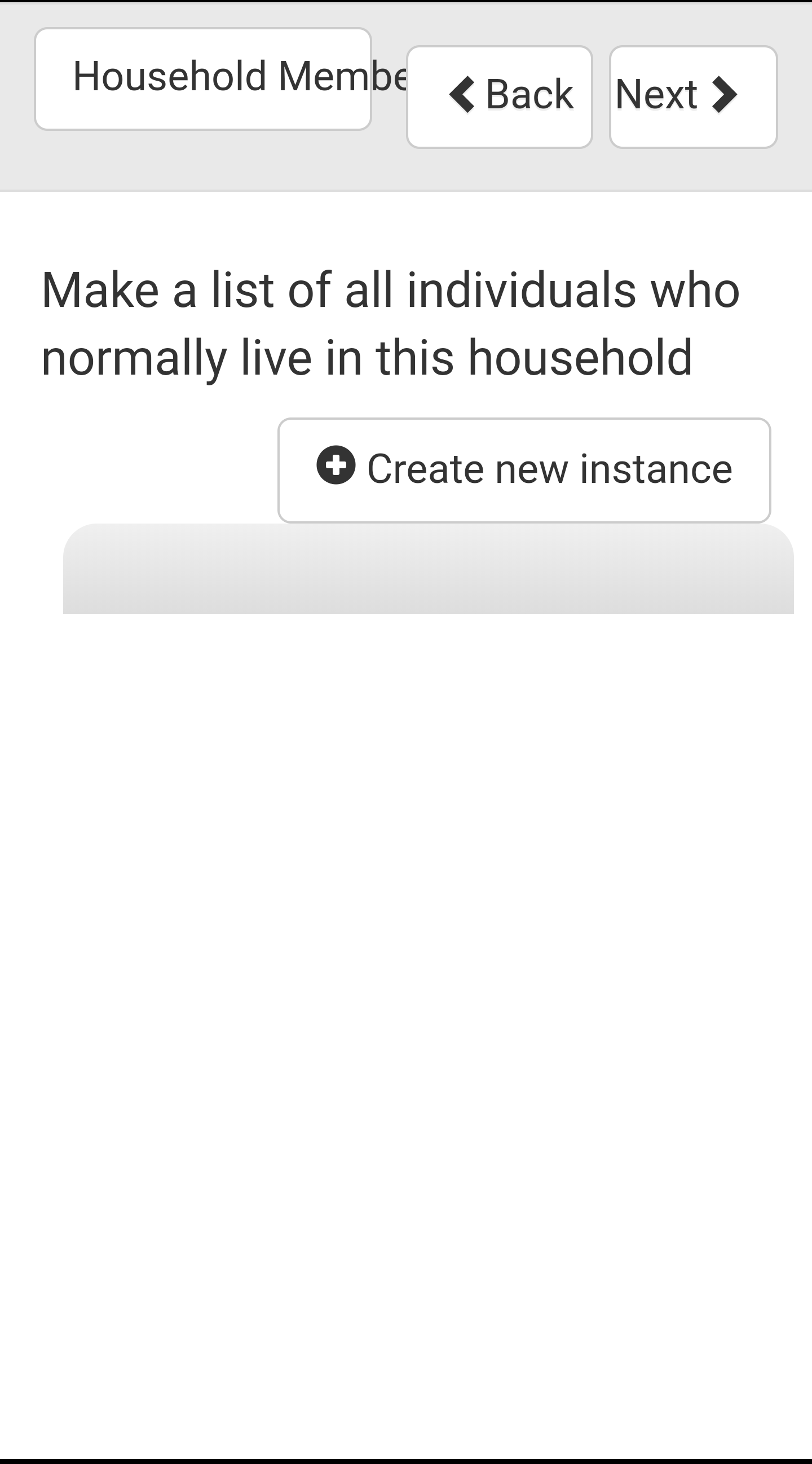 This screen within the Household Survey shows the launcher for the Household Member Survey subform. Clicking Create new instance will launch the subform. 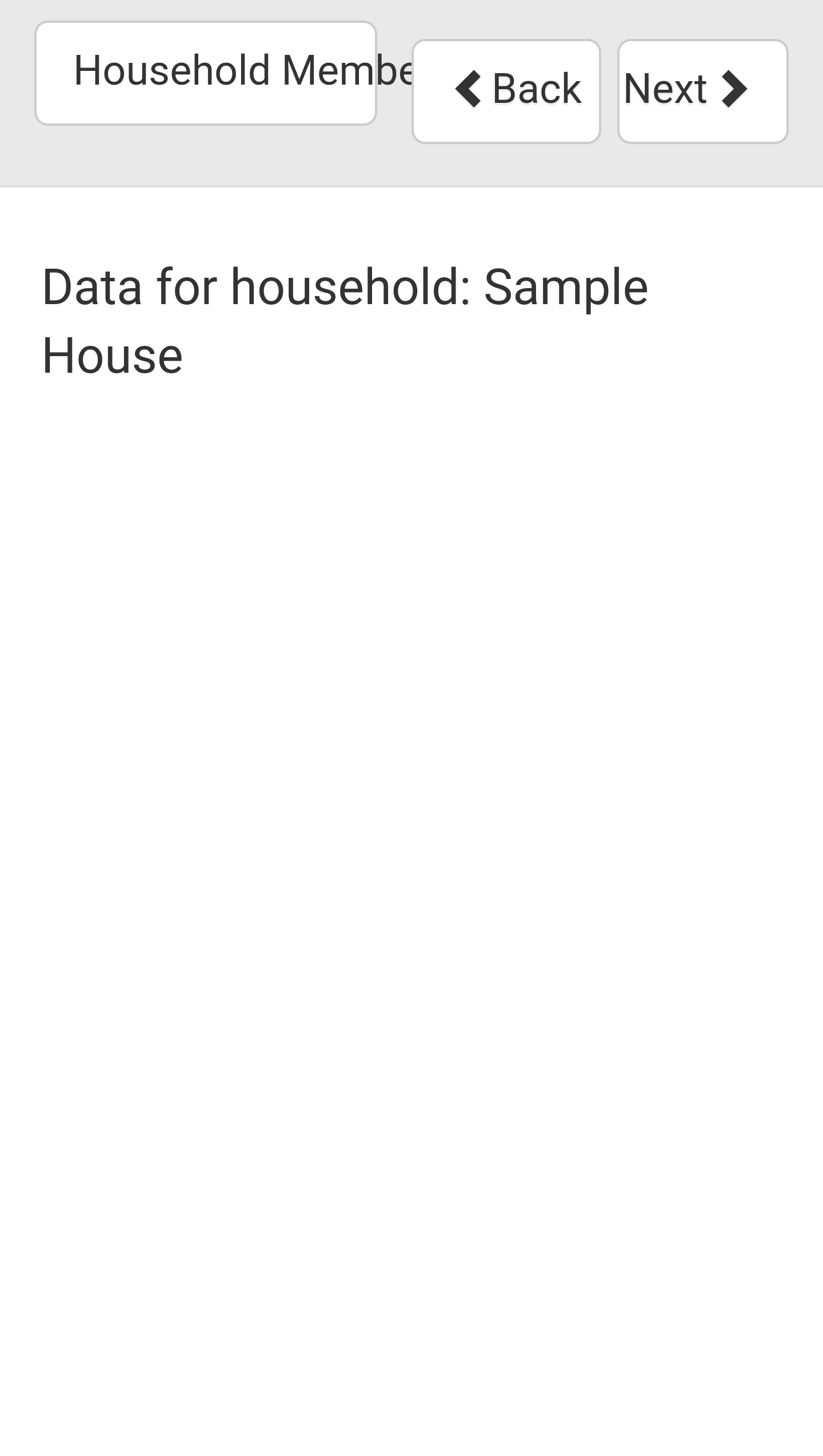 This is the first page of the Household Member Survey subform. It displays the name of the household, Sample House, which was collected in its parent Household Survey form. After this subform has been filled in, the flow will return to the parent form. 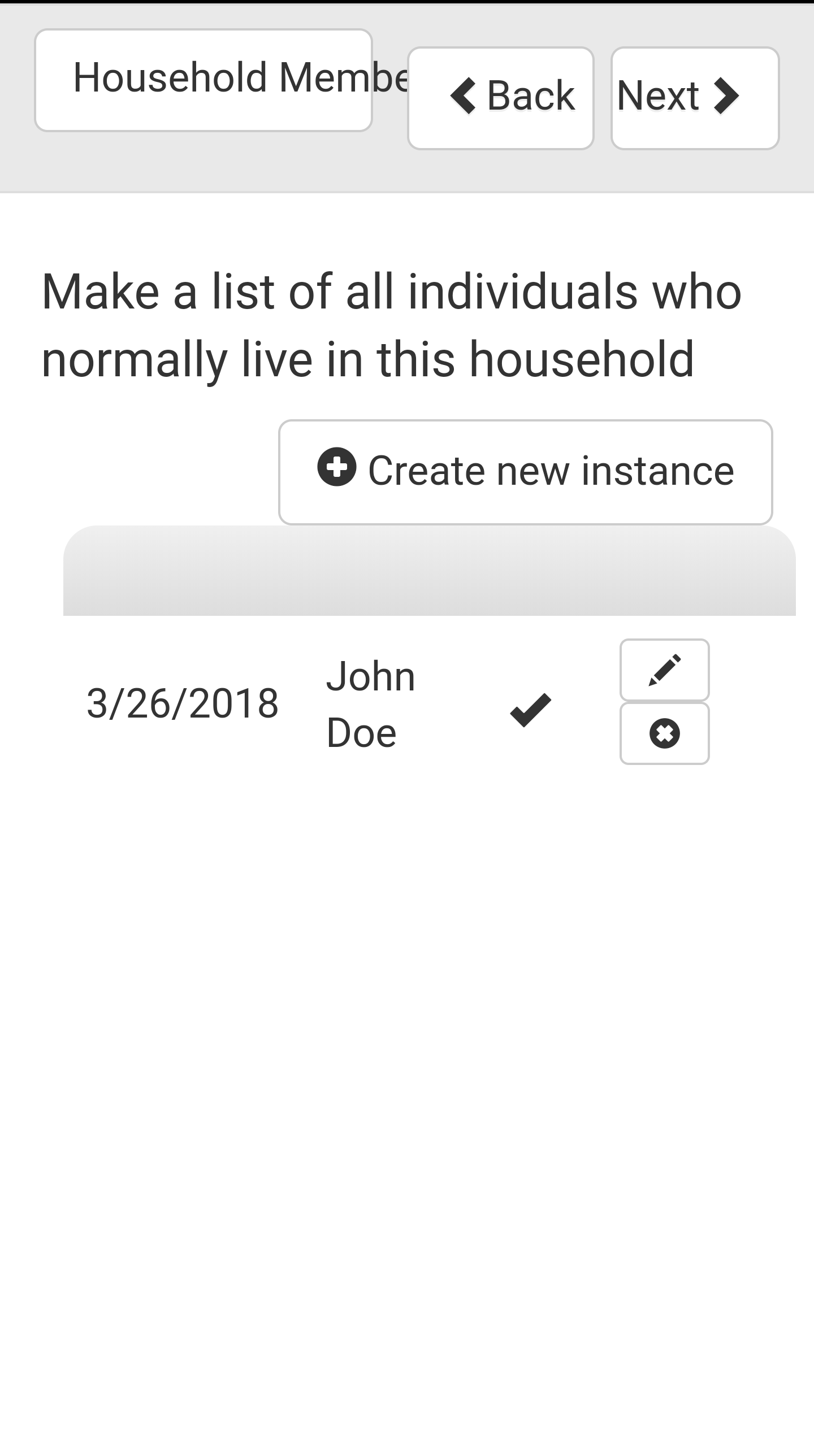 Completing the Household Member Survey subform returns us to the same screen we launched from in the Household Survey. The instance created by the subform is now displayed. If you tap the Create new instance button again, you can create multiple instances. 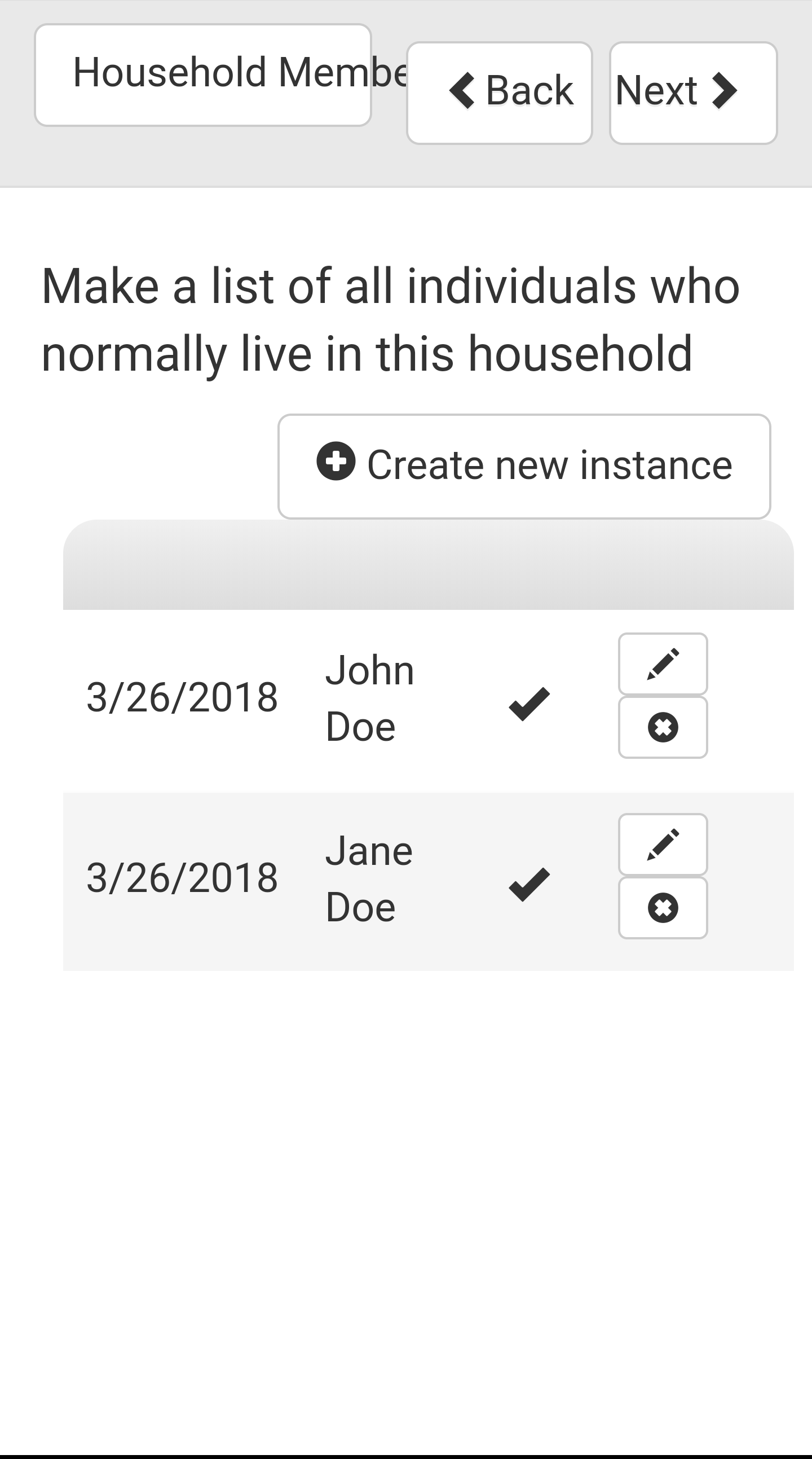 All the forms listed on the home screen can be ordered in two ways either by Table ID or Name. Press the action button (⋮) and select the Sort by.

The screen will show two options as Table ID and Name as described below:

When saving a form instance, you can either mark it as Finalized or Incomplete.

Marking a form as Finalized does not prevent you or another user from modifying it later.

There are three ways to save a form: 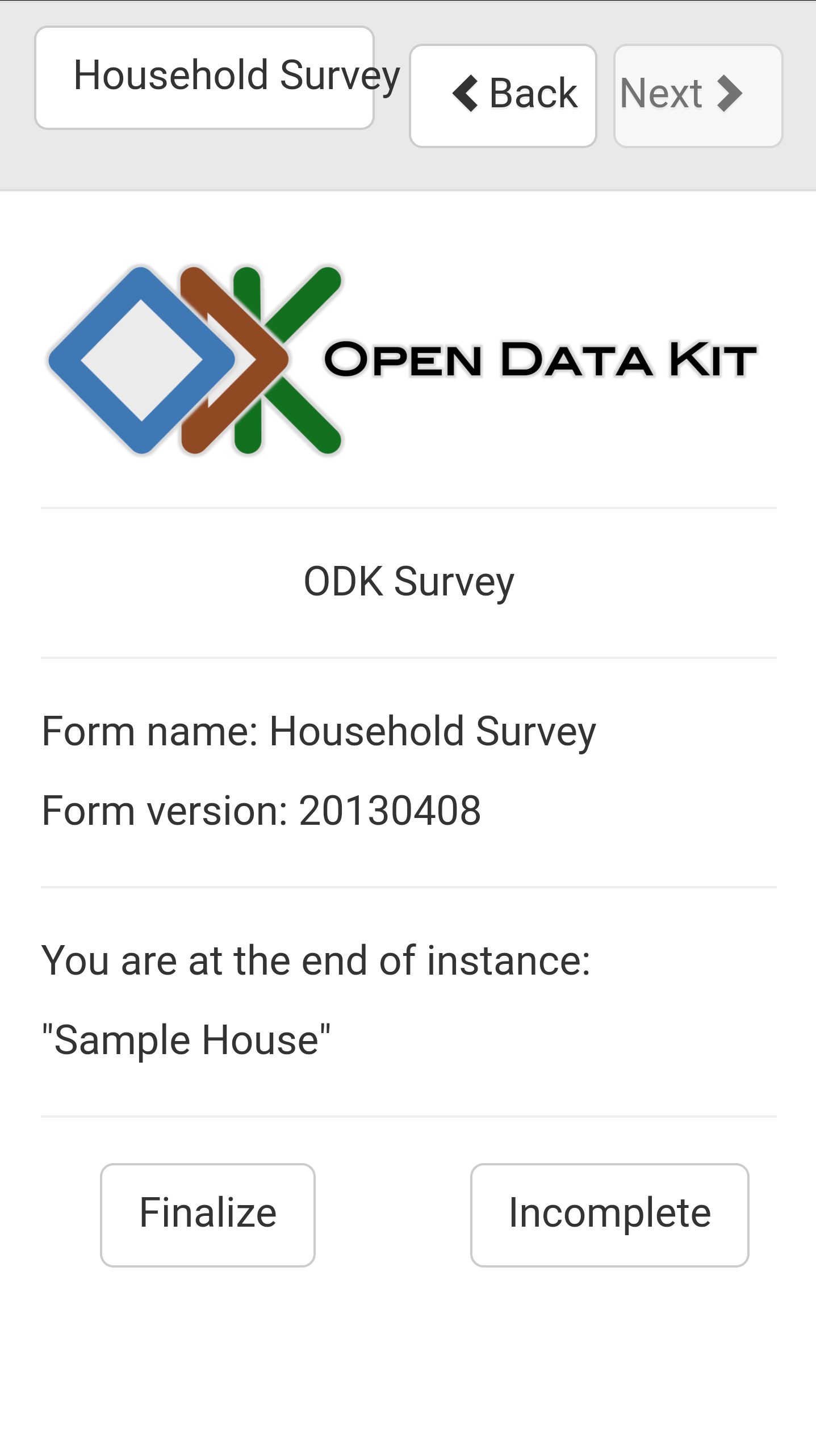 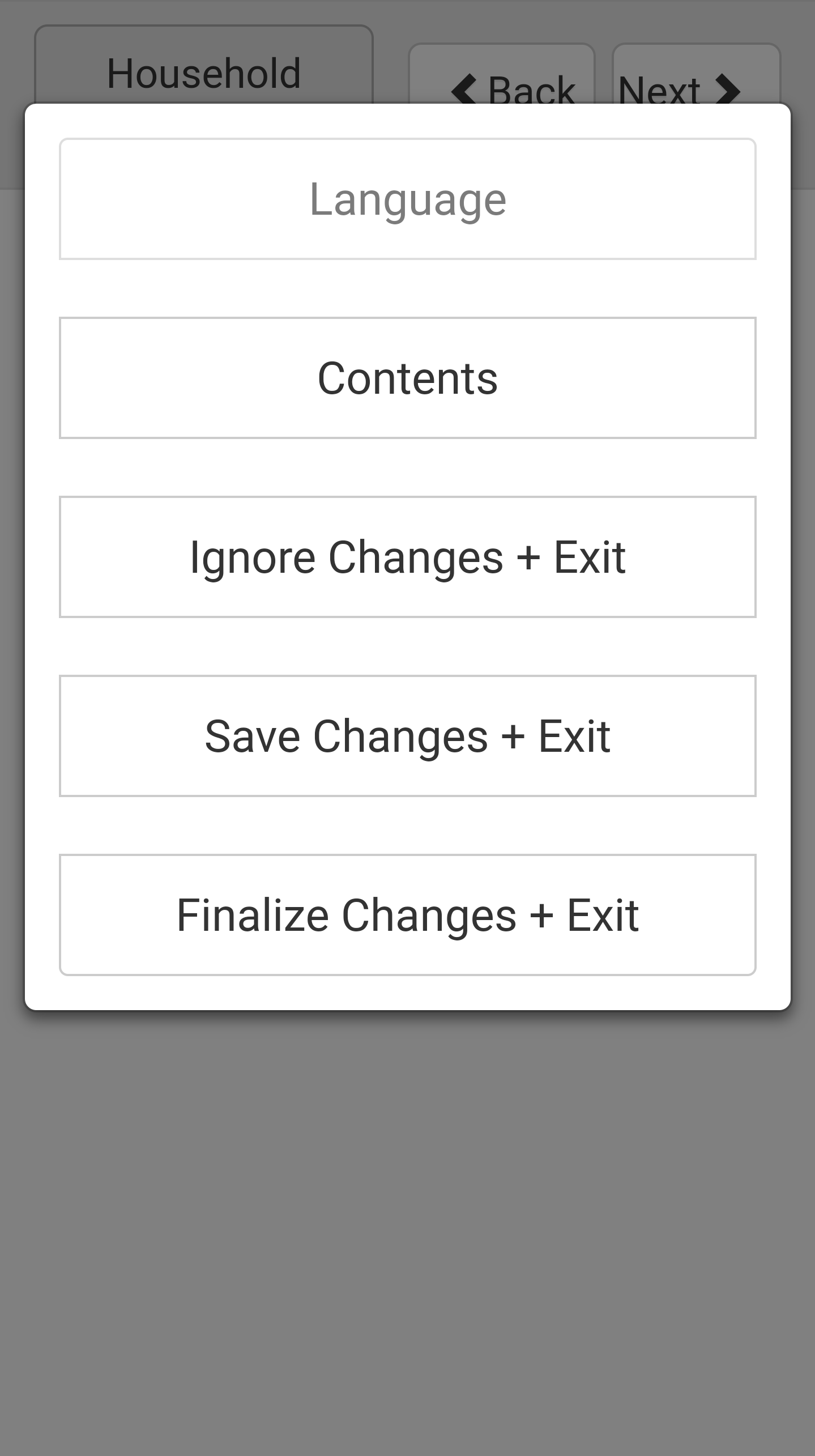 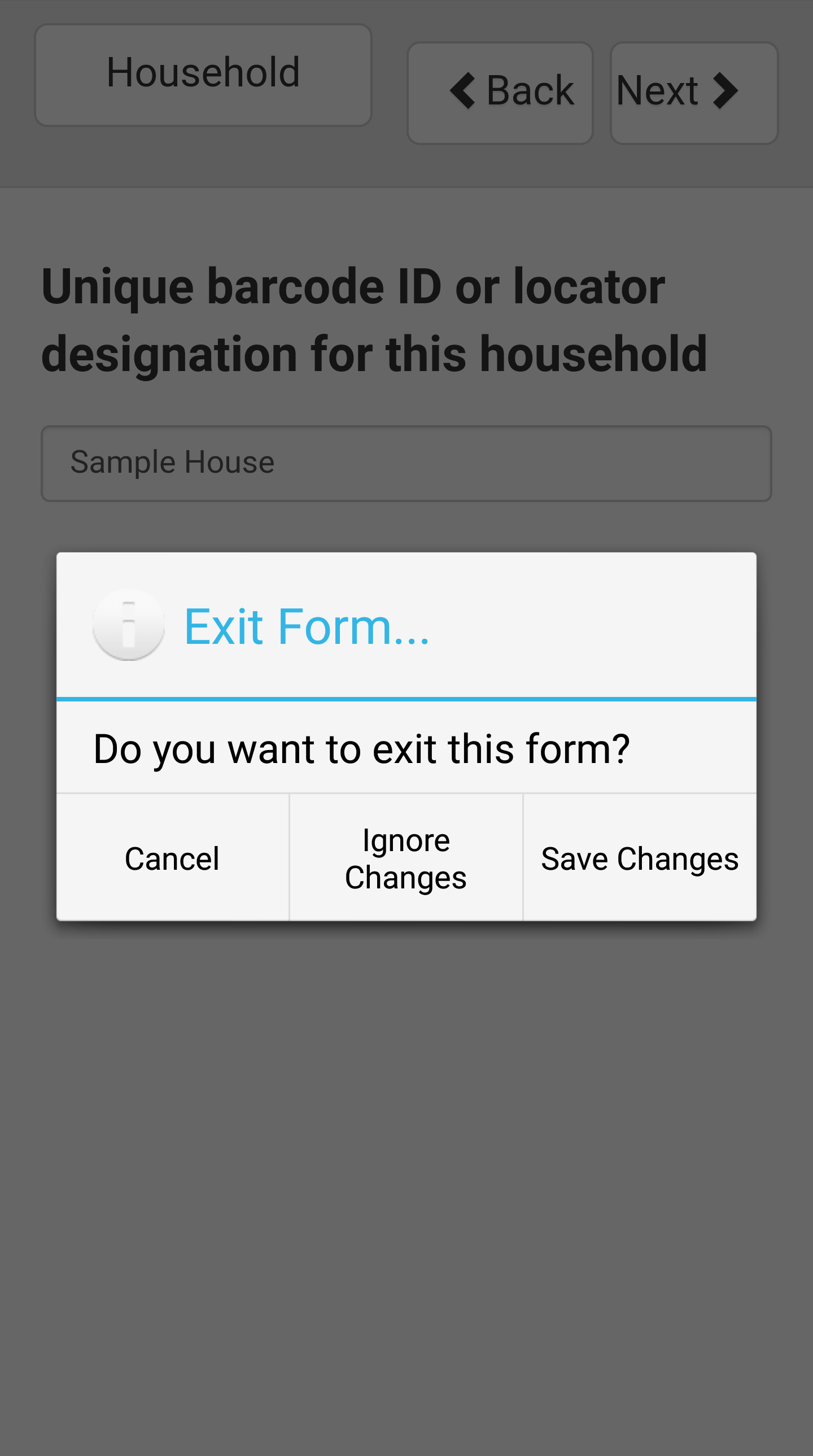 This menu does not have an option to save a form as Finalized.

A list of previously saved form instances is viewable on the home screen of each form. Open the desired form (instructions in the survey-opening-form guide) to see this list.

This list of saved form instances is not limited to those collected on your device. After synchronization, this will include all form instances from all devices that have synced with the server. Take care not to edit form instances that you should not be editing. 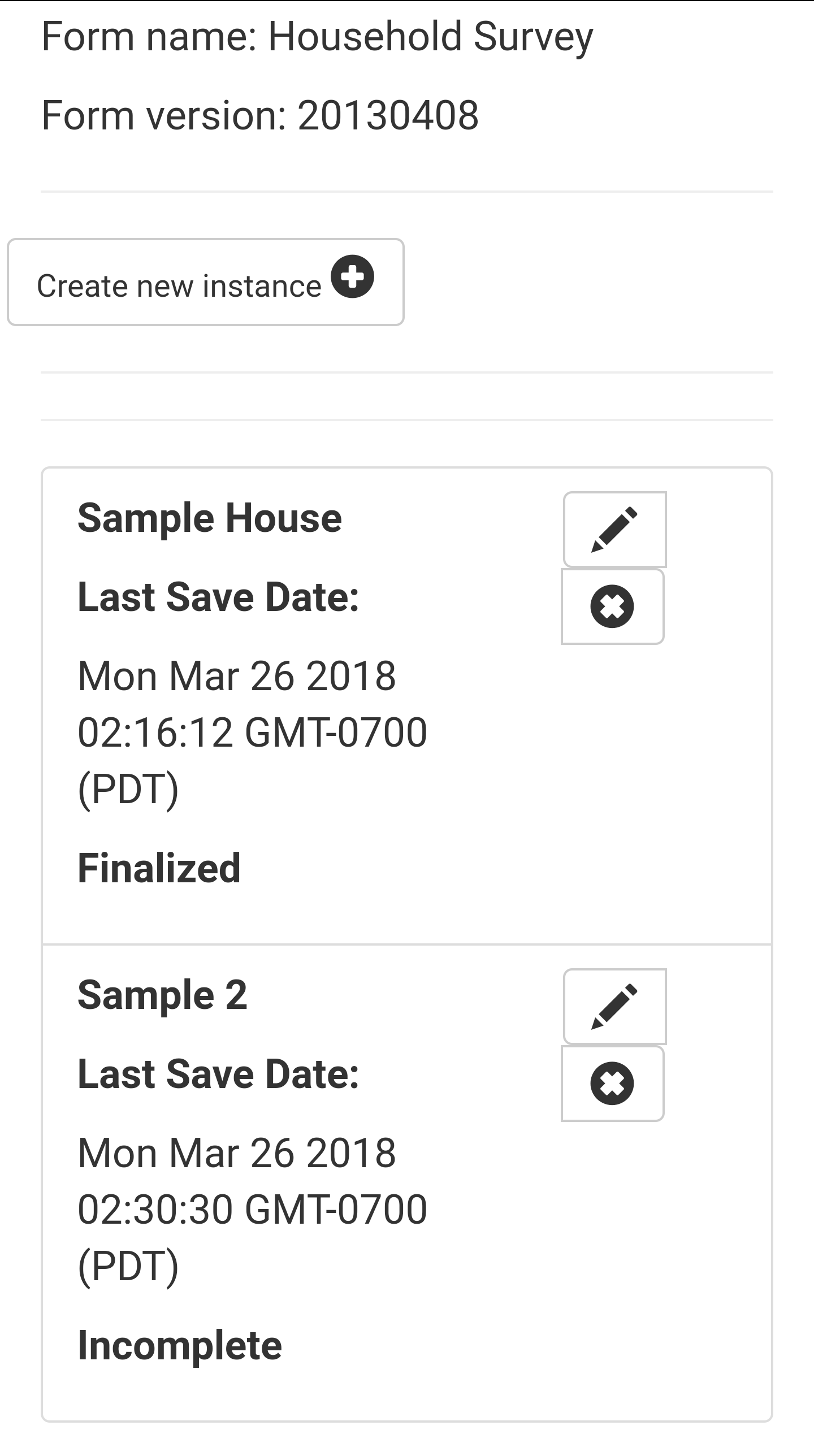 This list of instances is ordered reverse chronologically by the last saved date, with the most recently edited form instance on top and the oldest form instance at the bottom. These instances are marked as either Finalized or Incomplete (see Saving a Form Instance for definitions).

To edit a form instance, tap the pencil icon next to the instance in the instance list on the form home screen. 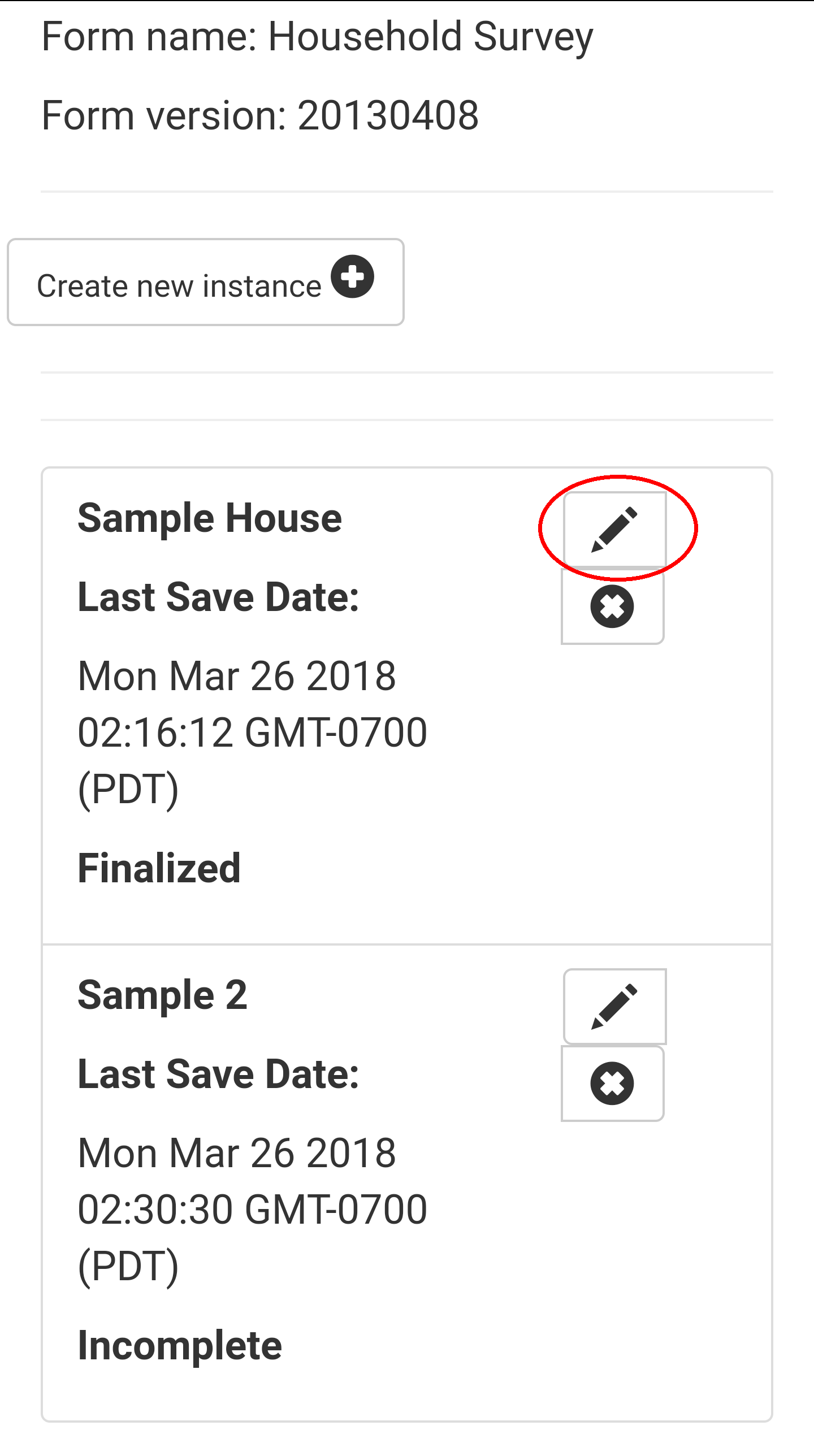 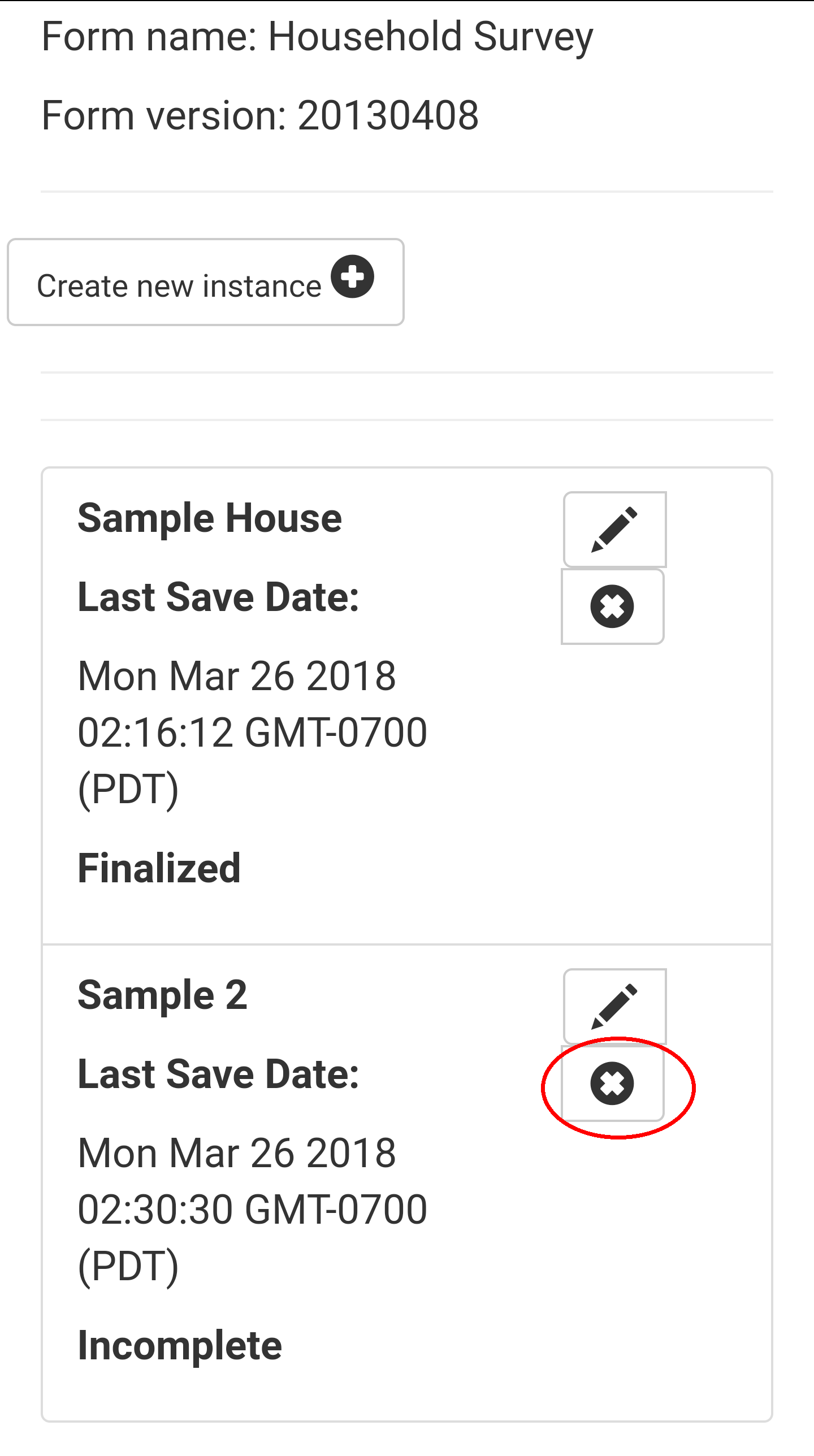 Forms in Survey are defined in HTML, CSS, and JavaScript. A default look-and-feel, along with an extensive selection of prompt widgets, is provided by the ODK-X framework, but this can be customized by your organization. This guide assumes you are using the default look-and-feel.

Every change you make to the data in the form is written immediately to the database as a checkpoint save.

See the instructions in the ODK-X Services user guide.

Setting up a Form Development Environment¶

To get started creating your own Data Management Applications, go to the ODK-X Application Designer documentation.

Basic instructions for designing Survey forms are provided in the ODK-X Survey: Designing a Form.

Survey forms are created in Excel and saved as .xlsx files. These are converted into form definitions using the ODK-X XLSX Converter. The linked guide should help you create and modify the files to create your own forms.

Use the ODK-X XLSX Converter Reference to find all the features you can use in your Survey forms.

Launching With a Different AppName¶

The ODK-X tools are designed to support multiple independent Data Management Applications running on the Android device. Each of our tools has the ability to run in the context of either a default application name or a specified application name.

By default, ODK-X Survey runs under the default application name (as does ODK-X Tables and the other ODK-X tools). Application names correspond to the name of the directory under /sdcard/opendatakit where the configuration and data files for that application are stored.

Each Data Management Application will store its own server configuration. Therefore after an initial setup that points each application at its proper server, the user will not need to remember which server hosts which app.

Here we describe how to launch the ODK-X tools into an application name of your choice with the use of widget shortcuts.

To launch and use that application:

Please note that ODK-X Survey version 2.1.9 does not support Android 4.x. Its minimum Android version is 5.0

This highlights the isolation of Data Management Applications in the ODK-X tools. This is even more powerful with applications that use ODK-X Tables because you can create entirely isolated applications, such as a forestry app and a health clinic app, and have the forms and data entirely independent of each other.

This eliminates the need for different groups to fork the ODK-X code base.

The new AppName cannot be the same as another AppName that already exists on the device.

Using the above technique will keep your apps cleanly separated. You can also maintain multiple Data Management Applications in the same Application Designer instance by making alternative app-designer/app directories and creating new Grunt tasks to push them to the device.