ODK-X Sync Endpoint is an implementation of ODK-X Cloud Endpoints. It runs a server inside a Docker container that implements the ODK-X REST Protocol.

It communicates with your ODK-X Android applications to synchronize your data and application files.

There is an important library called Sync Client which implements the sync protocol by interacting with Sync Endpoint and other tools. The source of this library can be found here: https://github.com/odk-x/sync-client. This is a library that can be used to execute the ODK-X sync protocol in Java applications.

Depending on your needs, ODK-X Sync Endpoint can either be installed in a cloud-based virtual machine, or on your own infrastructure. 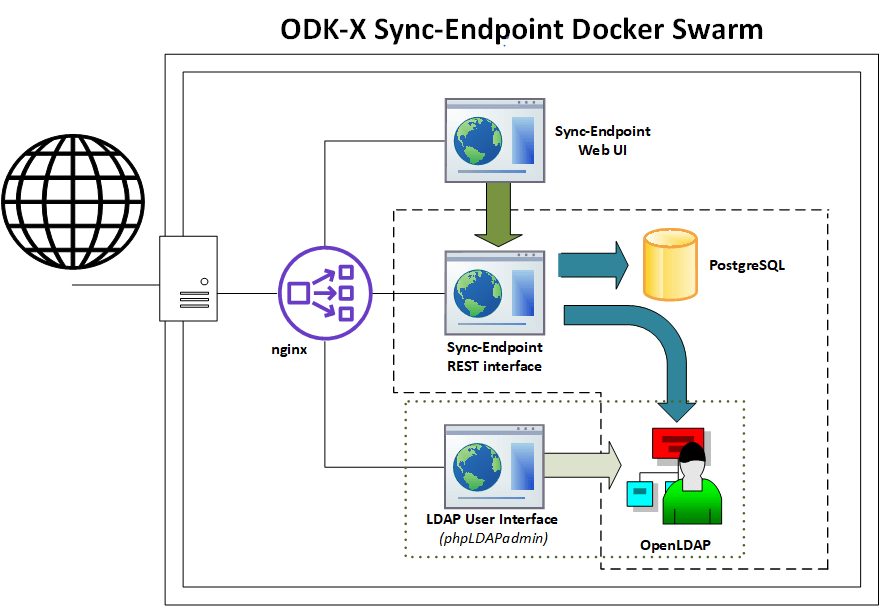 The Sync Endpoint REST server does not store user information in its own database; instead, it integrates with an LDAP directory (it can also integrate with other user management protocols such as Active Directory). The OpenLDAP microservice is used to authenticate users and obtain user roles. To give the system administrator a graphical interface to add/change/remove users and groups, the endpoint leverages the phpLDAPadmin web interface running as a microservice that presents a web user interface of the data in OpenLDAP.

ODK-X’s synchronization protocol is based on a REST architecture that keeps the data on multiple devices synchronized to a master copy stored on the ODK-X Sync-Endpoint. Clients do not have to worry about losing data, as API requests can be safely repeated in environments where network timeouts occur.

To minimize data updates that conflict, data updates are processed as row-based changes to keep changes small. For example, when performing a cold chain inventory, if updates were at a coarse granularity, such as table-based or file-based, a conflict might be detected for two workers updating refrigerators while working at different sites. By keeping conflict detection at the row-level, multiple users can make updates to shared data tables, and the system will detect that there is not a conflict as long as the same row is not updated by different users between their synchronizations.

A conflict is defined as two users with different updates to the same row. ODK-X uses table locks on the server to ensure only a single change to a data row can occur at any time. When the runner-up client finally obtains the lock and attempts to alter the same row, the update will be rejected as a conflict. Once a conflict is detected, the user manually determines which version of data is correct between their pending changes on the local client and the updated data row on the server. The rationale for having the user who caused the conflict also resolve the conflict is that the user was recently working with data and is likely to have the necessary information and context on how best to resolve the conflict.

ODK-X Sync Endpoint does not store user information in its own database, instead it integrates with an LDAP directory or an Active Directory. That directory is then used to authenticate users and obtain user roles.

HTTPS stands for Hyper Text Transfer Protocol Secure. It is a protocol for securing the communication between two systems e.g. the browser and the web server. To learn more about HTTPS and how it works see this video Working of HTTPS.

The Sync Endpoint stack integrates support for automatic certificate provisioning via domain validation and letsencrypt. For most use cases this should be sufficient. Certificate provisioning parameters can be edited interactively during initialization or directly in config/https.env. To learn about Certbot and letsencrypt visit this site Certbot.

For advanced users, if you would like to use an externally provisioned certificate one can be added by modifying the cert-bootstrap service in docker-compose-https.yml to pull from the appropriate external files. Additionally docker's built in secrets and config infrastructure can be used directly to expose the certificate and key only to the NGINX container.

In HTTPS, the communication protocol is encrypted using Transport Layer Security (TLS) or, formerly, Secure Sockets Layer (SSL). The protocol is hence also referred to as HTTP over TLS or HTTP over SSL. HTTPS signals the browser to use an added encryption layer of SSL/TLS to protect the traffic. SSL/TLS is especially suited for HTTP, as it can provide some protection even if only one side of the communication is authenticated. More information on TLS/SSL certificates is available here TLS/SSL Encryption.

The LDAP directory that you deployed with the instructions above is an OpenLDAP server. In addition to the directory, a phpLDAPadmin server is also deployed to help you configure the directory.

If you'd prefer to use the OpenLDAP command line utilities, they're installed in the OpenLDAP container. These tools are accessible with this command:

The phpLDAPadmin server listens on port 40000, it is important that you do not expose this port to the internet.

The following guides assume that you're using phpLDAPadmin. In order to perform the following operation, please go to https://127.0.0.1:40000 in your browser.

Editing the defaults of LDAP Directory¶

The default settings are as follows

If you want to use a UI outside the Docker Swarm in your local machine Modify the docker-compose.yml file in sync-endpoint-default-setup directory. Add ports mapping to the ldap service to expose the port 389 of ldap service to a port in your local host. If you wish to access the ldap protocol over TLS/SSL expose the port 636. Connect the UI application to this port on localhost.

The ldap service of the the Docker compose should be like this after adding port mapping.

The LDAP service running at any port will not only be accessible from the localhost but will also be exposed over the Docker ingress overlay network (which is exposed to the Internet in most cases).

For running the UI application in the Docker Swarm create a folder in the sync-endpoint-default-setup directory and create a Docker file inside it. Copy the templates folder from the phpLDAPadmin directory to the new directory. In the Docker file ,add the image of the UI application to be used and the "COPY" command to copy the templates folder to the right path inside the container.

To build the Docker image run the command in the sync-endpoint-default-setup-directory with tag odk/[YOUR_UI_APPLICATION_NAME]:

Edit the docker-compose.yml file. Replace the image of phpLDAPadmin service with odk/[YOUR_UI_APPLICATION_NAME].